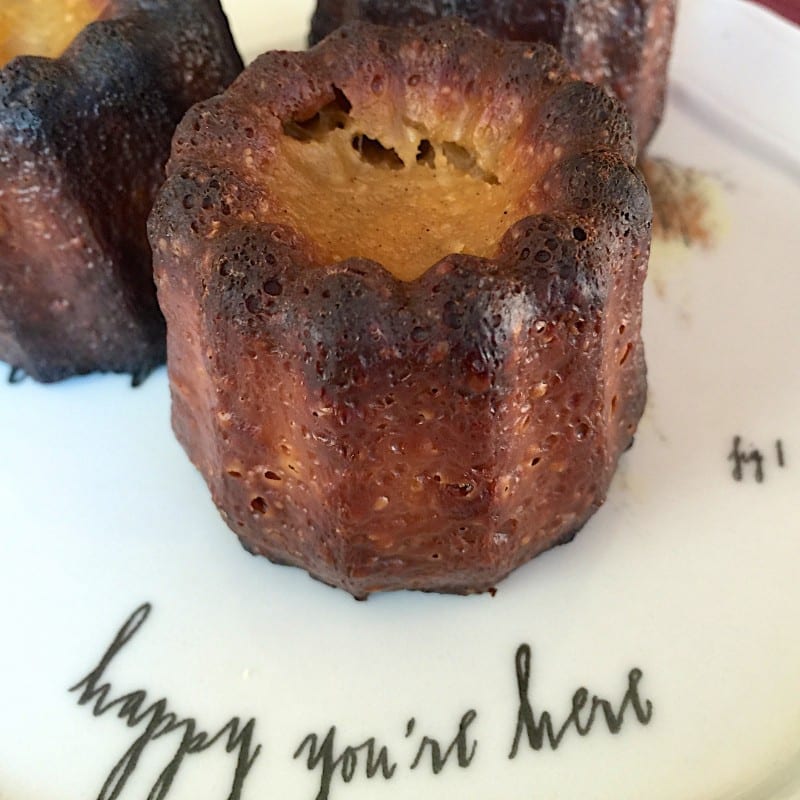 As I said in my last post, reading other peoples food blogs inspires me. Gives me ideas. A lot of the time they go on the back burner. Sometimes for months, even years. I don’t have a to-do list of these things, but a new post by someone else may get me off my butt to try something new. My friend, blogger and cookbook author, Cathy Barrow (a.k.a., Mrs. Wheelbarrow) has been a solid source of inspiration since I joined #CharcutePalooza back in 2011.

Cathy and I chat via the internet and exchange ideas. She posted a picture of canelé that came in a jar with armagnac on Instagram that got us talking and plotting to make canelé. She opted to go the traditional route with copper molds. I went with the newer silicone molds, the far less expensive route. Those copper molds are outrageously expensive. We also needed organic food grade beeswax to use in coating the molds. Amazon to the rescue. I ordered everything a few months ago. We planned to wait until the new year, since the end of the year is so crowded with sweets and Cathy was busy promoting her cookbook Mrs. Wheelbarrow’s Practical Pantry (go buy it).

Last week, I had brought home from the library Jacques Pepin’s Chez Jacques. It had a simple canelé recipe that only needed to rest 12 hours; most other recipes say 48 hours at a minimum. I chatted with Cathy right away and we set a date to bake on the weekend. I re-read the other recipes I had saved too.

I’ve probably mentioned this a dozen times, but I’ll say it again, Jacques Pepin taught me almost everything I know about cooking. I watched his PBS programs on Saturday mornings for years and years. I trust his recipes implicitly. I know they will work the first time and can take on new ones even when having guests over. So, it’s with his recipe I decided to plunge ahead with. With one exception, I had read about when using silicone for canelé you get better results when you coat the molds with a beeswax/butter combination.

I coated the molds, probably too thickly, and stuck them in the freezer awaiting the resting of the batter. The batter rested in the fridge until the next day, longer than the required 12 hours.

I poured in the batter and started to bake. They puffed. Oh no. I had heard terrible things about them

puffing up and spilling over. Mine never spilled and eventually sank back down. Since then I’ve read puffing is normal, runny spilling over is not.

There’s two thoughts on baking temperature, one is to start them at a low temperature and then later raise it. Then there’s the opposite. I choose to follow the first as that’s what Jacques does. My silicone molds are significantly bigger than the ones in the recipe so the canelé took way longer to cook, but in the end turned out pretty good. They were crunchy on the outside and creamy custardy on the inside. Yummy indeed. They’re not without their problems though. Their tops have what is called “white ass”. No disaster, but an imperfection. Analogous to making macarons with no feet.

Well they were still good. And today I made more with the high then low temperature method. They took forever to bake and I finally took them out of the molds for a final browning. They got a little extra brown, burnt even, but are very crunchy. Their insides however are not as creamy as the ones on Saturday. Another batch is in the oven, going back to the low/high method. And the postman brought me silicone molds to match Jacques size. So, more experimentation is coming. Stay tuned.