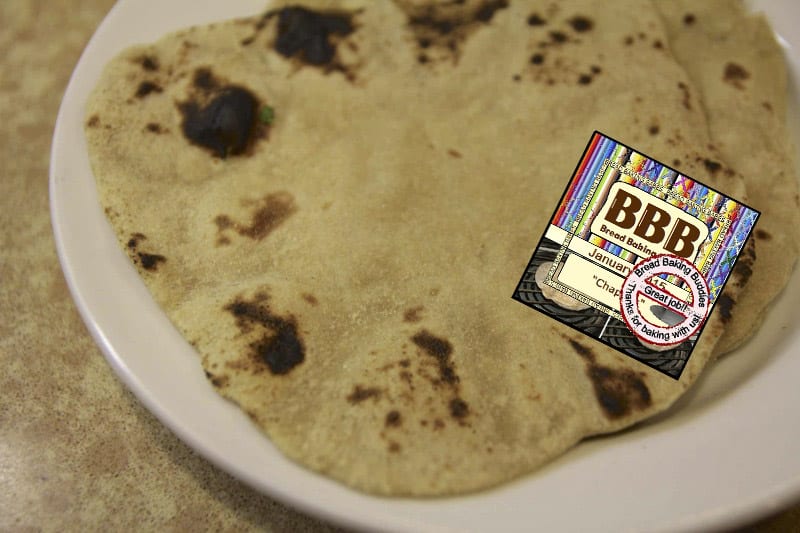 A few months ago a blog post I came across was for Bread from 1660 AD. Well, the recipe is from then anyway. It was a posting of one of the Bread Baking Babes. It was an intriguing recipe and I was going to make bread that day anyway so I made it, blogged about and posted all that same day. I found out that the group puts out a monthly challenge and those of us extras, known as Bread Baking Buddies, are given a couple of weeks to play with the recipe, and post about it. I’ve not been that interested in the intervening months’ recipes. Then came January’s Chapati recipe.

I cook Indian a bit at home and I have made homemade naan before, but I generally buy frozen naan from Trader Joe’s or the nice toaster sized fresh ones at Costco and freeze them. I tend to always have a block of paneer in the freezer too.  So, last week I made an Indian dinner an Chapati to go with. I didn’t want to make a lot, since it’s just the two of us so I cut the recipe down. Chapatis are also known as Roti.

Since I have Indian grocery stores easily accessible I chose to use the traditional Atta flour. I got mine at Vik’s Chaat in Berkeley for $4.99 for 5 pounds. I’ll be able to make a lot of Chapati with that.

Start out at least 45 minutes before you want to serve.

Put the flour and salt in a bowl. Add some of the hot water, but not all. Reserve a tablespoon or two. Add more water as necessary. You’re wanting to end up with a smoothish dough that isn’t too sticky. One blog I read called it silly putty consistency. And yes you young ones might not know what that is. Knead for a few minutes to get a smooth dough. Put the dough back into the bowl, cover and let rest for 30 minutes or more.

When you’re about ready to cook, divide the dough into 4 pieces. Heat a cast iron skillet or a Tava if you have one, over medium high heat. On a lightly floured surface roll out the dough a thin, but not too thin thickness. The best way I can think to describe it is about the thickness of ten sheets of printer paper stacked up. I bucked convention and rolled all of mine and covered them with a cloth until I was ready to cook them. It worked for me.

Light a second burner on your gas stove to medium low. If you have electric read the original post for instructions.

For each chapati put it into the hot iron skillet cooking 30 – 45 seconds on each side. Small bubble should be showing. Then transfer immediately to the burner with the flame. Miraculously they puff up. Once puffed I turned them over for a few seconds on the second side.

I enjoyed making these. They were easy and tasty. I still prefer naan, but will definitely make these again.

4 thoughts on “Making Chapati for 2”