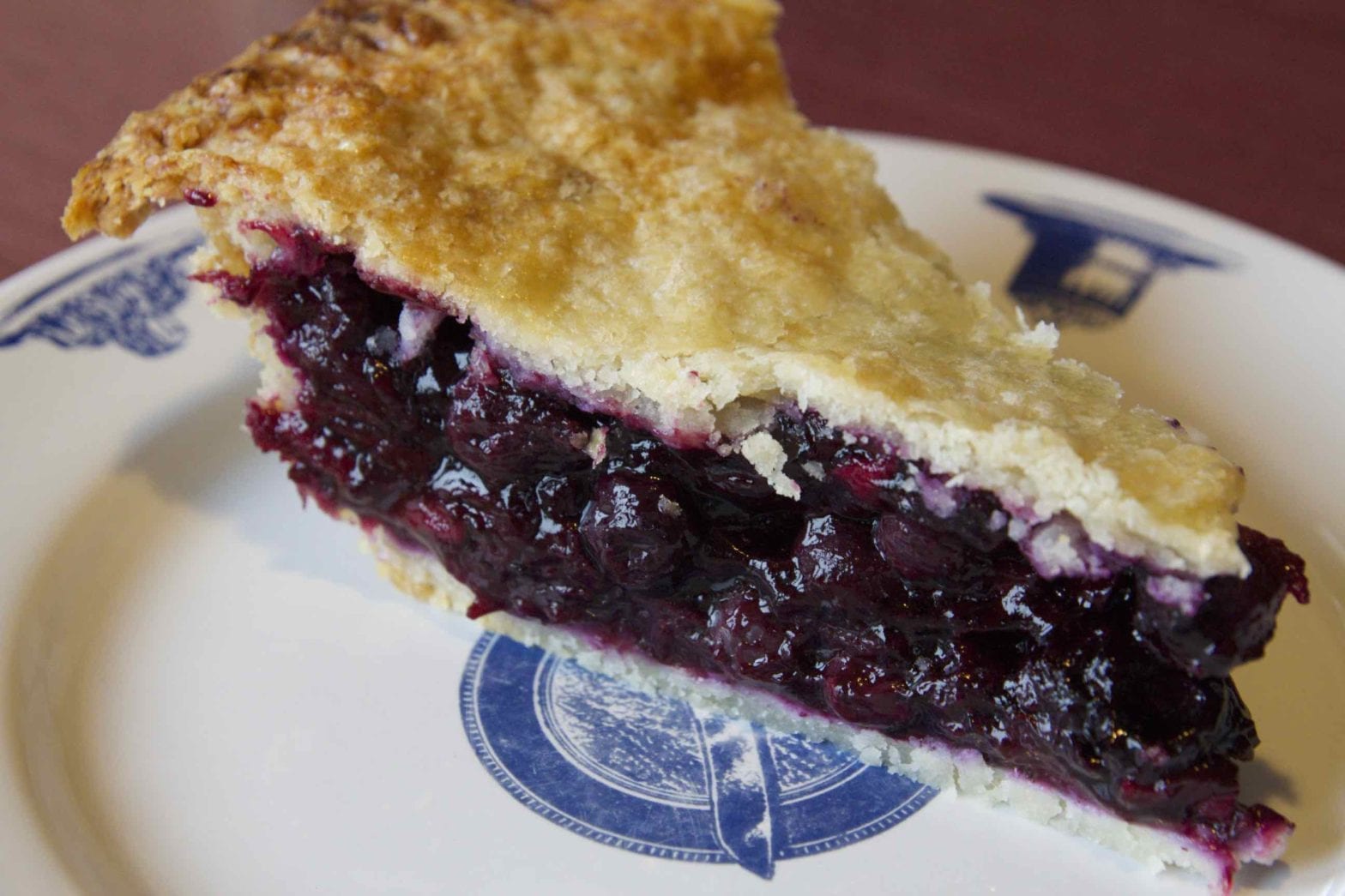 When I find a recipe that I like I rarely muck with it, but once in a while I can’t help myself. My favorite Blueberry Pie recipe for a few years has been one from America’s Test Kitchen. And although they have a couple of methods in it to keep the pie from being runny, it was still very soft and sometimes as runny as any other recipe. They also use their vodka method with the crust; something I tried for a while with success, but I’ve landed on what I believe to be a better crust.

This blueberry pie actual has a genesis in my peach glut earlier in the year. Canning guru Cathy Barrow (Mrs. Wheelbarrow, check her out) and I were chatting about things to do with my 80 pounds of peaches from our tree. I put them up under syrup as she suggested and then decided to tackle a Cardamom Peach Pie filling from her website. Her blog post highlighted the fact that the USDA only approves ClearJel for home canning of pie fillings. So, I ordered some via Amazon. But oops, I ordered Instant ClearJel and that’s not the one for canning, it’s just ClearJel. I made the filling with cornstarch after consulting Cathy.

So now I had this big bunch of Instant ClearJel. I Googled it and found that it was the perfect substitute for cornstarch or other thickeners in fresh fruit pie fillings. I left it sitting out in the kitchen so I wouldn’t forget to use it.

The blueberry bush never has enough ripe berries at once to do much with, so I collect them and freeze them until I have enough for a pie. Last year I still had to supplement with some wild frozen ones from Trader Joe’s. This year the pie was 100% Bates Motel berries. This pie was a huge hit. Even I, often hypercritical of my own cooking, couldn’t find anything wrong with it. It was a great pie, and for me there’s little better than that. You can have cake, give me pie.

Based on America’s Test Kitchen recipe, but different crust, more berries, different thickener. I’m writing the recipe as I made it yesterday with 100% frozen fruit, this resulted in cooked but whole berries, which I think also made the pie better. A note about lard: get leaf lard if you can, if not get backfat (fatback) lard from your butcher. That stuff from the big grocery store from Armour might work, but not as well.

Put flour in food processor. Cut butter and lard into piece and add to the flour with a good pinch of salt, smaller pinch if you’re using salted butter. Process in pulses until the fat is the size of peas. Add the ice water in one fell swoop. Process in a few more pulses until it starts to come together, adding more ice water by 1/2 teaspoons full if neccessary. Dump it out on a clean counter and very gently pull it together. Divide in two. Form into disks. Wrap in plastic wrap and refrigerate until very cold, at least a couple of hours. You can speed this up with some time spent in the freezer, but you don’t want it frozen hard.

Put 3 cups of berries in saucepan and cook over medium heat until they are reduced to 1 1/2 cups, 10 minutes or so. Stir frequently and you can mash up some of them if you like. I don’t find that necessary. Cool when done.

Peel apple, but leave the core in. Grate the outsides on the large holes of a box grater. Gather the result in a clean lint free kitchen towel and wring out as much moisture as you can. Throw the core to the chickens.

Put the apple shreds in a large bowl, immediately add the lemon juice and toss. Mix ClearJel with the sugar and add it with the zest, the cooked berries and the remaining 5 cups of frozen berries. Throughly toss everything together.

Roll one disk of dough out and line a 9” pie pan with it. I cheat and use one of these Pie Crust Bags to roll out the dough. I really helps cut down on flour use and lets you get a pretty thin crust. Fill with the filling. Pop it into the fridge or freezer while you roll out the top, especially if you’re in a hot kitchen. Roll out the top, use a small biscuit cutter to make some 1/2” holes in the top dough for steam vents. Or make any kind of vent hole you want. Take the pie out of the fridge and top with the dough, tucking the overhang under the bottom crust a the edges to form a good seal. Crimp the edges as you see fit. I always use a fork on blueberry pie, it just seems the way it should be done. Don’t ask me why.

Mix egg with 1 teaspoon of water to make an egg wash. Brush it all over the pie and sprinkle with sanding sugar. I was out and used plain sugar this time.

Pop the pie into the freezer for 10 minutes. Put it on a baking sheet and bake it in the middle of the oven for 30 minutes. Then turn the oven down to 350°F and bake another 30-40 minutes, until the crust is brown all over, to your liking.