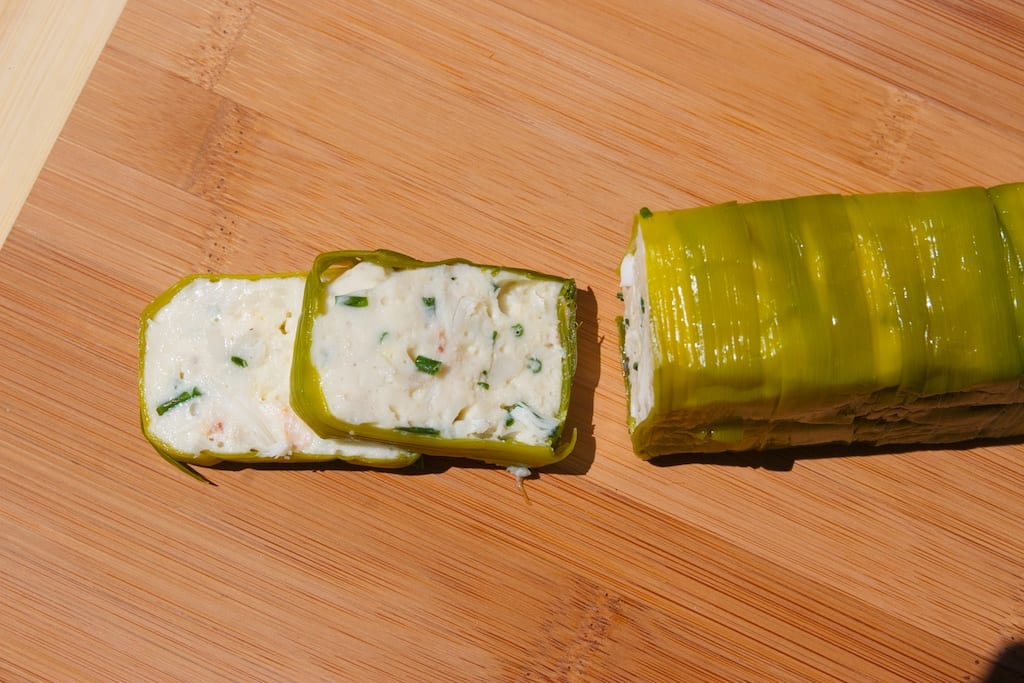 In the past year or so I’ve helped “harvest” our Thanksgiving turkey, had to cull a sick chicken from my flock and dealt with pig intestines and cow stomach like pouch that smelled funky. All of these have tested me. They’ve all been challenges that I’ve faced, gotten through and felt good about. However, I’m not ready to boil a pig head. From what I understand, it’s not the most pleasant smell. Usually, it’s smells that bother me the most in these situations.   So, I chickened out and made a mousseline for this month’s Charcutepalooza Challenge. I had grand ideas of taking the recipe in the book and modify it to stunning results. I didn’t quite have that in me this month either. Last month’s challenge kind of took the wind out of my enthusiasm. I know it shouldn’t have, but some other factors have been weighing on me too. But, you don’t come here to hear about my problems, so I’ll get back to making the mousseline.

There’s just two of us in the house and the two big terrines that the book’s recipe makes was going to be way too much. I had procrastinated so long that there was only a few days left in the month, with no dinner parties on the horizon to use the terrine for either. So, I made a half recipe and used it two ways.

perfectly on a cracker. It’s been in my collection of kitchen gear for a long time, originally getting it for an all hors d’oeuvres party that I prepared recipes mostly from Martha Stewart’s Hors D’Ooeuvres Handboook. It’s actually one of my favorite cookbooks to consult when having a big party.

In Martha’s book she also makes terrines in it. The cooked leek greens are overlapped on a piece of plastic wrap and it all fit very nicely into the mould. Onto the scallop and crab mousseline.

The cream is heated with saffron and cooled. Then in the food processor you puree the scallops with the cream and egg whites. The scallops were still very icy and the result was basically scallop ice cream. Hmm. There’s an idea there somewhere, but I didn’t have time to pursue it.
The chives and crab are folded in and then put into the mould. I saved enough on the side for my second recipe. The leeks are folded over and trimmed. Then the whole thing goes into a hot water bath and the oven. This small of a terrine didn’t take long to cook, somewhere around 30 minutes. The book’s recipe has you weight it down at this point, but that wasn’t really possible with the mould so I skipped that step and you’ll see some air holes in the resulting terrine. Nothing too dramatic though, I certainly didn’t think it detracted much from the final product.

I stuffed ravioli with them. I took the shortcut of using round pot-sticker wrappers for the ravioli, something I do quite often. They’re a bit thicker than won ton wrappers so I like them better.

I felt they needed a fairly simple preparation so as to not cover up the delicate flavors of the filling. I browned some butter in a pan, added some chopped leeks leftover from the terrine and threw in a handful of crab. The ravioli cooked quickly in boiling water and were tossed into the pan. I sautéed them for a couple of minutes letting them get a bit brown and crusty on the outside. They were outstanding.

Yesterday I had the chance to serve the terrine as an appetizer at an impromptu dinner that we got invited to. It was delicious. We ate it on crackers and just slices by themselves. Both were really good, but all alone the subtle flavors were highlighted better. Crackers on the bland side worked better and I imagine toast points would have been optimal.

I’m definitely going to use this recipe again as a ravioli filling. Then next time we have a big hors d’oeuvres party the terrine may well make an appearance too. When I’m feeling more flush and creative I’d like to substitute lobster for the crab.

Add a bit more crab to the mousseline if desired, it adds a little more texture. Make the ravioli by putting about one scant tablespoon of the crab mixture on a pot-sticker wrapper. Run a wet finger around the rim of the pot-sticker so that the top one with stick. Seal by pressing down all the way around or pick up and squeeze the two sides together all the way around.

Brown the butter in a large skillet, toss in the leeks and a couple of minutes later some crab. Sauté until lightly brown.

Boil ravioli until they float and then toss into the pan with the butter and leeks. Sauté to lightly brown the ravioli. Serve on hot plates.

Recipes in: Charcuterie: The Craft of Salting, Smoking, and Curing
By Michael Ruhlman & Brian Polcyn.