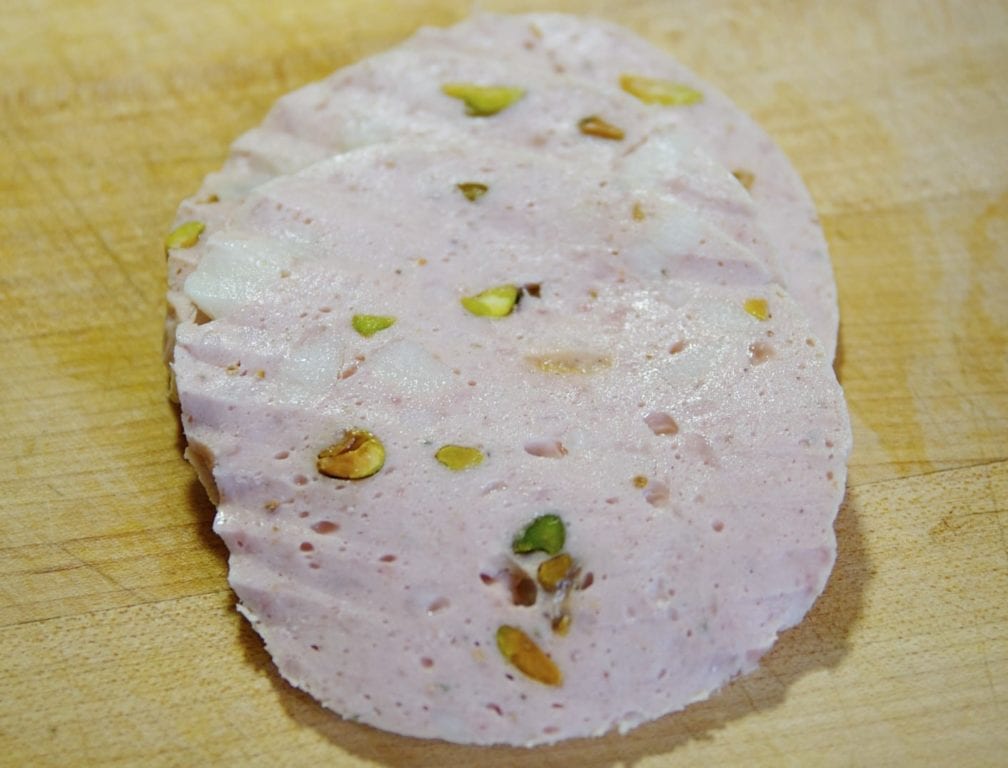 Blending, a.k.a., emulsification was the major objective of this month’s challenge. This meant that the meats would spend time in the food processor, becoming more like pastes than in our previous sausage making. It gives the resulting products a ‘bite’ that anyone who’s ever had a hot dog could identify, if they thought about it. I certainly hadn’t until this challenge.

I was in a bit of a pickle with the challenge as none of the assigned tasks particularly thrilled me. My palate has evolved and changed. I don’t much like the foods I liked at age 12, yet those were the very things we were tasked to make: baloney or hot dogs. To be accurate Mortadella not baloney. Yet, Mortadella is where Oscar Meyer got it’s inspiration.

I had a beef bung in the refrigerator from when I ordered the hog casings. I had read enough recipes in the book to think we might need one at some point. I also procured all the ingredients with dry milk powder proving to be the most difficult. I didn’t need the big box, but that’s all that was available at the first Safeway I visited. Luckily, the second had a smaller container.

The next day I set out to make the Mortadella. I got the packaged bung out of the fridge and set it to soak. Gross. This thing made me a little queasy. It has a smell. An animal funk smell, not rank, but not to my liking either. I rinsed and changed the water several times. The smell persisted.

Frankly, the bung smelled better than the next step: blanching the pork fatback. It’s the white chunks you see in the final Mortadella. OK, I was really having my stomach turn at this point. Luckily, I have not one but two strong fans in my vent hood. So, the smell was mercifully brief. Cooled off the fatback is then cut into big dice. I laid out the rest of the ingredients too.

I ground the pork butt and the other pork

fatback separately as the the recipe asks. They are put in the freezer to firm up as the process requires starting out with really cold meat. There are three stages of processing in a food processor: first with the meat and spices; second adding in the ground fat; third adding the powdered milk. You end up with a smooth sticky paste. The blanched fatback and pistachios are folded in, then it’s stuffed into the lovely bung. Pretty, huh?

During the Twitter Q&A session I had asked about using a sous-vide bath to poach the Mortadella and Michael Ruhlman said it would work well. It did, but took about 3 1/2 hours to cook to the 150°F temperature in the center. I use a crock pot with an aquarium temperature controller to do my sous-vide. I weighted down the Mortadella with a small plate.

It went right into and ice bath when done. The bung was cut off and into then into the fridge. The next day I sliced into it and tasted. The verdict? It tasted like baloney. Good baloney. How impressed was I? Not very. The work to wow ratio was low. Don’t get me wrong, it was good, but it was no pancetta.

I made a fried baloney sandwich with it, which is a very nostalgia filled thing for me. Mom used to make them when I was little. Frying it made the baloney taste special. So, even filled with memories of childhood, I couldn’t muster up much enthusiasm for Mortadella. Yeah it was good, it just wasn’t special.

I had heard about such good results people were getting with the hot dogs, so I decided to make them too, thinking they would be this blog post. I won’t go into the whole process here, it’s in the book. They also turned out to be a good version, with good flavor and the right bite, but also not worth the effort. I had problems stuffing & linking. Somehow, I’m getting worse not better at this.

I know I’ll be in the minority, if not standing alone, but this month’s challenge didn’t do it for me. It didn’t add anything to my standing repertoire. Learning the technique was good though and I’ll probably try some of the other sausages in this section of the book, like the smoked andouille.