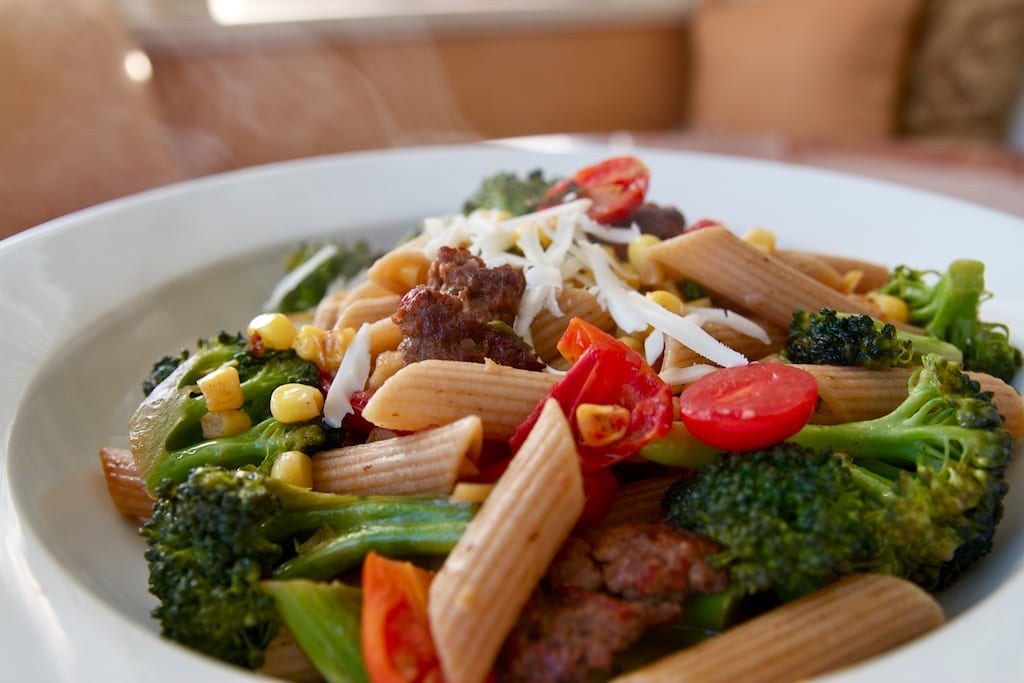 I’ve had the grinder attachment for my KitchenAid Stand mixer for many years. It gets drug out when I’m making giblet dressing at Thanksgiving, but aside from an occasional extruded pasta, that’s about it. This challenge was a good excuse to haul it out.

Merguez, a spicy northern African lamb sausage, was my goal. I got some very nice local lamb shoulder from Ver Brugge, a great butcher shop on College Avenue near the Oakland/Berkeley border. Their friendly butchers are always accommodating. Back at my car I realized I had forgotten the pork backfat. In and out again, $1.53 poorer and I was set.

Back at home I set about chopping the large chunks of boneless shoulder into more manageable size and adding all the ingredients Ruhlman & Polcyn have in the recipe to the bowl. I had written the amounts for half a recipe in the book and when I got to the roasted red peppers I didn’t find the open jar in the fridge I just knew was there. Luckily, the pantry had a jar of roasted piquillo peppers in it. The jar ended up being just the right amount. I used smoked Spanish Paprika, sure that it would add some great flavor. Fresh oregano from the garden was the last item I added. It looked pretty already. Everything got tossed together and then thoroughly chilled in the fridge. Actually, I put mine in the freezer for 30 minutes.

Next came the grinding, which took quite a while. I was actually glad I was only making a half recipe. I was however satisfying to see the grinder getting used and doing a good job.

When it was all ground and mixed with the wine and ice water in the bowl, I fried up a test piece. Spicy? No. Not at all. Maybe my red pepper flakes are getting old. I added more and tested again. Still not spicy. I added some cayenne, even

tasting a little to verify it was hot. I tested again and only got a minor hit of heat. I added a little more cayenne and called it a day. I didn’t want to overdo it. Maybe it would get stronger as it “aged.”

A recipe from my standard rotation, that I’ve been making forever, was the perfect use of the merguez. It’s a simple pasta recipe I learned from Jacques Pepin. It’s very adaptable to what’s available and is even good with frozen and/or off season vegetables. Cherry tomatoes are often the best choice of tomato off season. The finished dish is pictured at the top of this post. It was terrific with the merguez, but the merguez never did get very spicy.

Bring salted water to boil for the pasta.

Heat 1/2 of the oil in a wide saute pan over medium high. Add the sausage, and cook until brown and mostly cooked, breaking it up as you do.

Separate the broccoli into flowerets and stalks. Cut both into 1 inch pieces. If the broccoli stems are fibrous you may want to peel them first, I usually don’t. Add them to the pan with the sausage, stir in the garlic, lower the heat to medium low, cover and cook until the broccoli is tender, 5 – 10 minutes. You can add a splash of the pasta water to speed things along.

Add the pasta to the boiling water. Cook until al-dente or your desired doneness.

Reserve 1/4 cup of the pasta cooking water, drain the pasta and add it to the pan with the sausage and broccoli. Add in the reserved water, the corn, tomatoes and the rest of the oil. Boil for a minute or two to meld everything together and warm the corn and tomatoes.

Serve with topped with the grated Parmesan and a drizzle of olive oil.

Scott’s Notes: The variable amounts in the recipe are to let you make this dish a more meaty one by upping the sausage or a more veggie one by upping the vegetables. The amount of pasta also depends on the people you’re feeding. We’re quite happy with 3 ounces per person, but if you’ve got field hands or teenagers to feed you’ll want to up that.