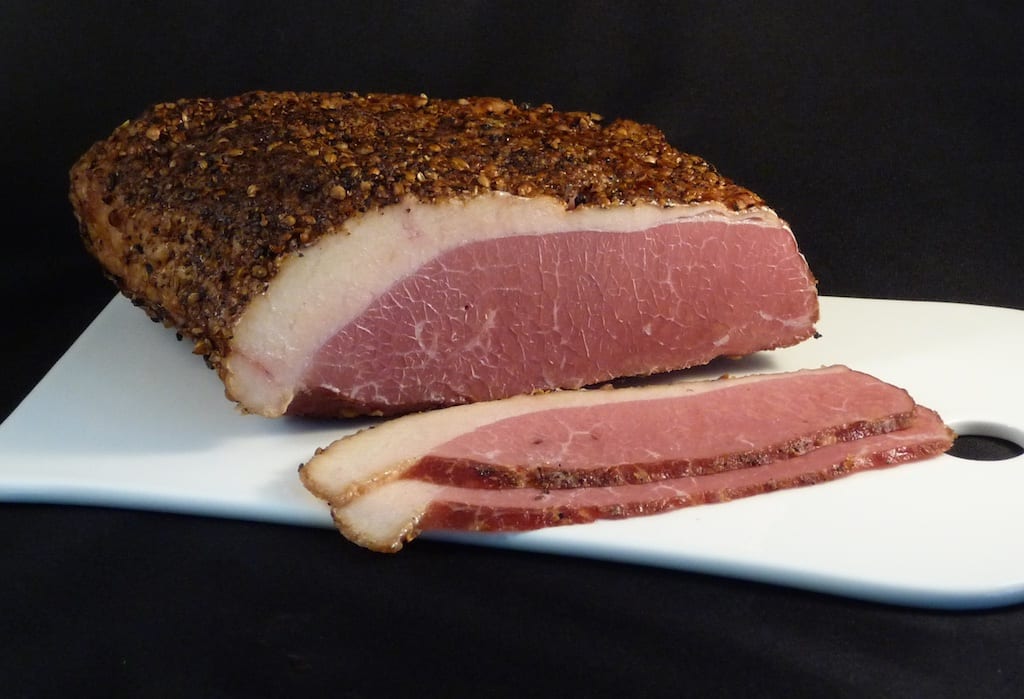 The #Charcutepalooza challenge for March was brining. Brining isn’t new to me. I’ve brined turkeys, chickens and pork before. However, I’ve never brined beef. So for this month’s challenge I chose to take on corned beef and pastrami.

I purchased about a 3 pound brisket from Marin Sun Farms at Market Hall in the Rockridge neighborhood of Oakland. I didn’t want anything too big because it’s just the two of us in the house. Plus, neither of us is that excited about the standard corned beef boiled dinner. It’s nice once a year, but even then we’re not that into it. I’ve taken to preparing corned beef a different way over the last few years, but more about that later.

I cut the brisket into two pieces, knowing I’d use the bigger end for our preferred pastrami. I followed the recipe for the brine, including making the recipe for pickling spice. Only later did I realize that I already had a jar of it. Just as well, the homemade looks fresher and better anyway. Once the brine was chilled, the brisket pieces went in and I put a small plate on top to keep them submerged completely. They sat in the back of the fridge for 5 days, with me checking in on them occasionally. Not that they really needed that.

Out of the brine and washed off, I spread the recommended mixture of cracked coriander and pepper all over the bigger piece and put it into our new smoker. The pastrami recipe stresses that you should try to get as much smoke into the meat as possible. The smoker runs a little hot for cold smoking, so I had to babysit it way more than I like, turning the burner on and off every 15 – 20 minutes so that it didn’t get too hot. Doing so I was able to smoke the pastrami for about 5 hours before it reached the final 150°F temperature. It looked pretty when it came out and smelled heavenly. You can see it sliced in the picture at the top.

As the pastrami was smoking I put the other end of the brisket into the pressure cooker with water, peppercorns and bay leaves. I cranked up the heat under it and cooked it under pressure for one hour. Opening the lid I was shocked at it’s diminutive size. I forgot how corned beef shrinks. It was a good thing just the two of us were having this for dinner.

At this point the corned beef gets studded with whole cloves, smothered in a mustard sauce and baked for one hour. It’s quite different and I’ve come to prefer it to the boiled version. My favorite part of the boiled dinner though, is the potatoes and cabbage and you can still cook them with the juice leftover from the pressure cooking. The baked corned beef recipe follows.

So far the #CharcutePalooza challenges have produced products at home that have been well worth the effort. I’ve never tasted better pancetta than mine. I’m already running low on it and have plans to make another one. I do love the pastrami, and the corned beef turned out fine, but I doubt I’ll brine my own beef again, until maybe next year around this time.

Wash beef.  Cook under high pressure in pressure cooker for 1 hour with 3 1/2 cups of water, the bay leaves and peppercorns.

Put beef into a shallow baking pan.  Dot beef with whole cloves.  (or lightly dust with ground cloves)  In a saucepan combine remaining ingredients.  Cook until blended.  Pour evenly over meat.  Bake in oven for one hour. Slice and serve.

Recipes for both in:Charcuterie: The Craft of Salting, Smoking, and Curing By Michael Ruhlman & Brian Polcyn. 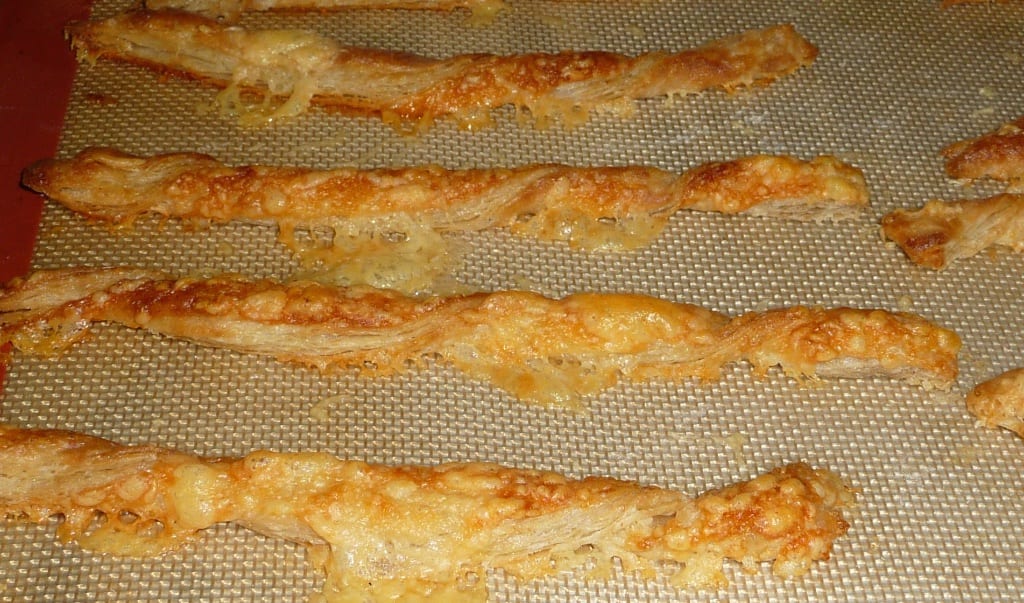 I’ve seen several chefs on television make ‘quick puff pastry’, but for some reason I’ve never tried it myself. I was always worried that it would end up far inferior to the frozen stuff at the grocery store. A few months ago Martha Stewart had chef Nick Malgieri on her show and he made Food Processor Quick Puff Pastry. I printed out the recipe right away and it’s been in my stack of things to try since.

With our Mardi Gras Party on the horizon I thought it a good time to try out the recipe. I followed it to the letter and worried about how the dough looked, but just stuck it in the refrigerator and hoped for the best. The next day I made a very small batch of cheddar cheese straws to test it out. Looking in during baking I was ready to declare them a disaster, but in the end they were quite delicious and flaky.

I made a bunch of them for the party and they all disappeared. I still had some dough reserved though and we’re having friends for cocktails this afternoon, so I whipped up a fresh batch of cheese straws this afternoon. They’re the ones pictured above.
Cheddar Cheese Straws

Sprinkle the puff pastry with some cheese before you roll it out. Roll it out pressing the cheese into the puff pastry. Cut into strips, twirl them up a little and put on a silpat or parchment lined baking sheet. Throw some more cheese over them if you like.

Substitute any cheese you want. Parmesan works great too.